E H Timms
E H Timms won the BBC Wildlife Young Poet of the Year award in 1992 and hasn't managed to stop writing since. She now lives in Wiltshire with a computer tethered to one elbow.

Race to the Top

I know it's a wide open field now, but what made me really interested is why the favourite pulled out, and I'm pretty sure it wasn't that he had to dash down to the shops for a new beard trimmer.

Let me back up a moment. We have a roof running race every third year. This one, everyone thought that the winner would be obvious. He's quicker and nimbler than anyone I've ever seen, and he can get across even the worst set of tiles like a scuttling lizard. But like I said, he dropped out. Vanished. Vamooshed. Left the field of competition wide open, and I could scrape up a bit of hope again. Or try to, because too many of them were looking at me now and I couldn't be sure that whoever nobbled him wasn't going to come after me next.

Which was how I found myself following his trail across roofs and walls and fences until it finally dropped to ground level in a tangled workshop district, next to a tiny abandoned space - one of those nooks and crannies that all its neighbours think one of the others owns, and is actually not owned by anyone.

He was waiting for me when I got there, his arms protectively round a couple of tiny kids.

I put my hands up and out at once. "Not going to hurt you. Just wanted to check you were ok."

He grinned, and the shadows danced behind him like errant wings. "Go win the race," he told me. "It really isn't my scene."

I gave him a confused look, because who wouldn't want to win the roof-race if they could?

Turns out, those weren't shadows behind him. They were real wings.
Posted by E H Timms at 09:12 1 comment: Links to this post

Both Birthday Landscapes and Holding Onto Day are now on sale until 7th March. Only at Smashwords!

Grab them while you can!

Blurb: Cavallan Kee, legendary hero, faces an important task. Home on leave just in time to celebrate his twin children's birthday, he has little to offer other than this: "For today," he tells them, "I'm yours to command..."

Flash Fic Challenge: Waiting For You


Alice leaned her elbows on a marble slab and watched as Antonia's coffin was brought in. Against the cold, pale, walls of the mausoleum, the black clothing of the few mourners looked like smudges of smoke. Like smoke, they didn't stay long, but drifted away, splitting between the main house, and the cars that would carry them even further. They didn't notice or speak to her, but then she always had blended into the background rather well.

Antonia had noticed her, but then Antonia was - herself. Bright firelight to Alice's moonlight, warm and inviting and getting into things and places that she shouldn't. They'd first met on a winter's day when the clouds had hung low and dark like a shawl pulled tight against the cold. They hadn't touched then, of course. Antonia had been so young, and so alive, blazing with delight at finding someone to talk to. And talk they had, for so many snatched hours, as many as Antonia could spare.

"Go," Alice had told her, the last time Antonia had been out here. "Live life to the full. Live and laugh, love and learn, as you are made to. I'll wait for you, for as long as it takes. I'll be here when you come home again." And now here she was again, hair gone to starlight, eyes framed in laughter lines, reading callouses on her old hands.

Everyone else had left, except for the workman. He closed the lid on Antonia's dead body, pulled welder's goggles over his eyes, and sealed the lead lining on the coffin. The tomb closed, the man left.

Antonia's ghost sat up through the lid of the coffin, looking only a little older than the young woman who had helped Alice grow ivy over her tomb. "You waited," she said, sounding surprised.

"As I promised," Alice retorted, with a wide, delighted, grin. "You haven't changed."

"Neither have you," Antonia quipped back. "But that's to be expected. It has been a while though, hasn't it?"

"Just a few decades." Alice extended her hand and bowed over it, courtly style. "May I have the pleasure of this dance, my little dearling?"

Antonia laid her hand in Alice's and stepped down from the tomb, as elegant as any courtly lady of Alice's time. "The pleasure is mine," she said, "and I have so much to tell you."

"I missed you," Alice admitted, "but we have all the time in the world now."

They ran together, ghostly hand in ghostly hand, down the line of marble slabs, past Antonia's new, sharp-edged carvings, past Alice's older resting place where the ivy hid the name she'd been wrongly buried under, until they came to the empty end. And there, unshadowed by loss, they danced by the light of the moon.
Posted by E H Timms at 11:44 1 comment: Links to this post

And here's the cover for Birthday Landscapes featuring the title scene! 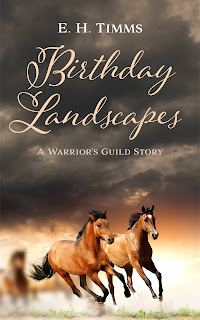 Blurb: Cavallan Kee, legendary hero, faces an important task. Home on leave just in time to celebrate his twin children's birthday, he has little to offer other than this: "For today," he tells them, "I'm yours to command..."

Gentlefolk of all genders, I have an Announcement! My story Birthday Landscapes will be out as a standalone on February 22! Now available for pre-order at iBooks, Barnes and Noble, and Kobo, but not Amazon.

Goodreads: https://www.goodreads.com/book/show/50629949-birthday-landscapes
Posted by E H Timms at 09:00 No comments: Links to this post

Rosie, 42nd of that name, tucked her toes neatly under the foothold and leaned into Mother's shoulder. "The hedge doesn't make any sense," she said, tracing the delicate hologram of Sleeping Beauty's castle with her finger. "It ought to be a dome if it's to keep people out, otherwise you can just push off the deck and float upwards until you're over it."
"It's magic," Mother replied, paging onward to Rosie's favourite part, with the needle prick and the sleep. "It works how the fairy thinks it should work."
Rosie smiled. "Time for me to sleep, soon," she said, her eyes lingering on the new image. She unhooked her toes and a small push sent her floating over to fetch the adapted tea press. "Will you be here when I wake, Mother?" she asked, handing it over.
"I will always be here."
"Even if I sleep for a hundred years?"
"Even if you sleep for a hundred years." Mother filled the tea press, and they both placed a finger on the rod, so like an old spindle, and pressed down together. Mother poured the tea through a tube into Rosie's drinking bulb.
Rosie took it in both hands. "To sweet dreams," she said, toasting for the last time. She pulled herself up and into her glass cold-sleep coffin and stretched out her hands for the needle prick. The last thing she remembered before her eyes closed was Mother kissing her goodnight.
The robot, Mother, closed the lid, slid the coffin into its place in the long line, and wrote another name on the list. Around her, the children slept forever, and the lost colony ship Briar Rose's Castle floated onward through endless space.
Posted by E H Timms at 06:57 1 comment: Links to this post